There’s a nice travel site called Kenya last minute that caters to the last minute travel planners. Similarly, taking up last minute offers is a trend that also spreads to investing and there is a lot of interest now in the public infrastructure bond PIBO (not BIPO) on sale from the Kenya Electricity Generating Company (Kengen) that closes on September 29 and targets to raise almost $200 million in exchanges for paying investors 12.5% interest p.a.

Anyway, what’s the rush? We have had one month to make a decision that covers ten years! And if this was a share sale, we’d probably see queues of potential investors lined up around stockbrokers offices holding bits of paper, cheques, ID’s etc. at least one of whom would look into the TV cameras and say something like “serikali ingetuongezea sisi siku moja tu” (the government should add one more day for investors). The offer has not pulled queues to the street corners, but it’s excepted to achieve its goal, as targeted marketing and forums are being held around the country

So what is there to guide last-minute investors? Blogger Kainvestor has a nice PIBO summary derived from the information memorandum almost from the day it was released and there’s no need to repeat the good points he has noted there.

Good for retail: with an over-subscription expected, the resultant allocation is likely to favour retail investors. The minimum investment has been set at 100,000 ($1,315) which is the same as the recent Kenya government infrastructure bond that was aimed at raising 18 billion but yielded 26 billion. Then, and probably now, the allocation formula was skewed in favour of retail investor compared larger investors and institutions. 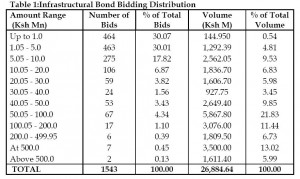 Bad for retail: liquidity in the secondary market for Kenyan corporate bonds is low; while the NSE twitter feed (@NSEKenya) notes that the bonds segment witnessed trades worth Kshs. 1.15 Billion (on September 24) which is an increase from Kshs. 80 million worth of bonds traded yesterday, this was all in the government bonds segment, while corporate bonds are rarely traded; those who buy them, rarely trade them, so if a retail investor is looking to cash out early, odds are not good.

Also, read another BIPO analysis from the Business Daily.