Since the last look at mpesa developments in mobile money, there have been another raft of new deployments as Kenya’s two main mobile companies – Safaricom and Zain who have been signing up partners for their respective MPesa and Zap money transfer platforms. Here’s a recap

Banks using M-pesa: Commercial banks have been long whispered to have a lot to fear from m-pesa but I disagree. Yes bank are going to have to step up and use the mobile phone to reach their customers better, and they are in a better position to do this than mobile companies. Mobile money itself is not the sole reason for the loss of relevance of some banking products since fraud, insecurity, transport costs and transaction costs have also contributed e.g. banker’s cheques have been plagued by fraud which means that banks now subject them to the usual 4-day clearing cycle, while landlords and schools now ask clients to deposit funds in their (own) payee accounts and furnish deposit slips as proof of payment.
Banks have gone the option of launching their own mobile applications for their customers including include Barclay’s m-money and these include Barclays, Equity, Family Bank, ABC and others. A few others have gone on to collaborate with mobile companies. Two notable ones are:
1. Consolidated Bank whose customers can transfer money from their bank accounts to m-pesa
2. CFCStanbic whose customers can pay their suppliers by mpesa from their bank accounts: more here

Investor Relations: Pay Dividend payment by mobile phone – last week, Safaricom shareholders approved the payment of dividends from the company to their fellow 830,000 shareholders via m-pesa. This will happen in November 2009.

Airlines last is the airline, because it shows again, the difference between zap and mpesa. Monday’s Nairobi Star had an advert from Jetlink showing that their passengers could now pay for airline tickets by M-pesa– up to the maximum m-pesa limits of Kshs. 35,000 ~$500.

That should have been the end of the airline section, but I was reading the latest issue of African Business magazine which had an interview with Tito Alai where he mentioned that Zain had signed up Coca Cola, and – Kenya Airways (KQ) saying “a passenger can book a KQ ticket online, pay by zap, and check in at airport with his mobile phone” great right? But Kenya Airways have not launched this program – and their customer care told me to only pay by cash or credit card. Kencell/celtel/zap have a history in Kenya of coming up with innovative products, but Safaricom market/apply theirs better. Is this another case with KQ? That the company is up for sale (again) is not a positive sign for development of new partnerships & products. Then on the news of August 24, it was reported that Zain Kenya had launched 3 Zap applications – zap distro (web tool to manage dealerships), zap transact (collect cash from numerous sources direct into bank accounts), zap master pay (ease cash administration – so a company pay up into up to 1,000 zap accounts at a time). Maybe now KQ and Coca Cola will reveal their plans for Zap

User innovations:
But as many innovations as the large corporates come up with for mobile money, the users are the ones who will come up with the innovative, creative ways of adapting them to their lives. Here are a few examples

24 hour M-Pesa had a lunch at a joint that had a rather rude manager, after he spotted me taking a picture. Anyway, many mpesa dealerships tend to close at 5PM, while others like Uchumi (supermarket) can do transactions up to about 8 PM. But now bars, who are open for many more hours e.g. Taidy’s (Nairobi west), are offering 24 hour mpesa banking. 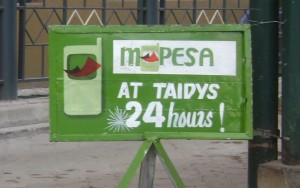 Overcoming challenges Also, while the country is ongoing a power rationing for the next few month, M-Pesa is largely unaffected, as it is not dependent on electricity which the banks are. But M-pesa down time & system outages, agent, and lack of float for several hours a day may compromise its integrity in the eyes of consumers, who may see Zain’s Zap as a reliable back up channel

Money transfer across networks: since their introduction, the mobile companies have been walled in I.e. M-Pesa can only be sent to Safaricom customers, while Zap money to zain users. There have been calls for cross-network transfers to be allowed, with appeals to the regulators (CCK, CBK) to force this to happen. But in this market regulation trails innovation, and this wall has been broken down,- as explained by @Gishungwa “from zain you can send money to Safaricom, it costs the sender 10 shillings, but the recipient pays 30 shilling to withdraw cash and it works well”

Other Uses
– harambee (fundraisers) where more money is sometimes raised by m-pesa than from cash collections at the event. This is also safer and money goes direct to the intended recipients
– Televangelists: every Sunday morning religious show on TV will have a prominent display of mpesa and zap numbers for viewers to send in cash for prayers
– Others are dowry payments, bar bill payments, petrol payments at fuel stations