Back in October 2006, I wrote two posts about pyramid schemes that had mushroomed and would eventually ‘burn’ thousands of investors in Kenya.

And the last year has revealed bigger pyramid scams in the form of Bernie Madoff and Alan Stanford, and just yesterday in the Kenya Parliament, some political leaders were un-masked as some of the master minds behind some of the collapsed Kenyan schemes. 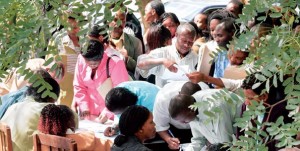 Image of pyramid investors from another business daily newspaper article on pyramids
So what was the genesis of the schemes and how they ended? And more important, can they happen again?

Pyramids Rise
– Early investors reaped, and told others about their success – i.e. doubling, tripling or even greater returns in a few months span
– Some schemes were promoted by churches (who received tithes in return)
– Pyramids opened new offices and hired new staff all around the country
– New pyramids opened up cloning existing ones, but promoting a slightly different product/concept
– People took loans to invest in pyramids
– Peoples sold land/ shares / other assets to invest in pyramids
– Pyramid investors cut across all sectors from rural farmers to bank managers

Pyramids Peak
– Early investors reaped, but were greedy and ploughed back as much as they won
– Pyramids grew so big they overwhelmed their managers – some stopped accepting new depositors (but not new deposits which were essential to the chain)
– Banks complained they were losing deposits at a time when interest rates were very low
– With IPO’s few and far between, stockbrokers complained they were losing investors during a bull market period

Pyramids Fall
– Banks put the squeeze on pyramid schemes, by freezing these recipient accounts with the funds in them
– Pyramids without cash, tried to switch to different banks and accounts to process their funds
– Banks warned other banks and the Central Bank issued some cautionary notices on schemes
– Some pyramids tried to convert into cooperative societies
– Some schemes bad-mouthed other pyramid schemes as unstable
– When locked out of banks, pyramids moved to safe houses in residential areas where they continued to receive/pay cash
– media coverage kicked in; some angry investors complained on TV about lost money and brought media crews to the safe houses showing other angry investors
– Deposits dried up, and investors demanded their cash.
– Pyramid schemes all collapsed largely at the same time in 2007

Could they have been prevented?
– They were unregulated: Neither the central bank, capital markets or co-operative sector regulator had over-sight over the schemes. Parliament was focused on micro-finance and anti money-laundering regulation bills.
– KYC: Schemes relied on the banking system to move around the money; and if banks applied true know your customer (KYC) principles, they’d have smelled a rat – with hundreds of people queuing in their halls to deposit funds into a single customers account

Unanswered questions
– What happens to the millions of shillings frozen in bank accounts?
– What happened to employees of these schemes? And if rogue stockbrokers were partly brought crash down by thefts from within (internal fraud /‘robbers robbing robbers’) could this also have happened at some schemes?
– Legal grey area still exists. Have any promoters being charged in court? Can any investors sue promoters for losses? The Cooperatives Ministry Task Force is looking at how to compensate investors – but is this justifiable?
– Can schemes rise again? History teaches us that pyramid/ponzi schemes will happen again and again. Maybe using mobile money transfers, or next time there’s an election. The Business Daily mentions they may have spread to neighbouring countries