The 55th annual general meeting of Total Kenya was held on May 19 2009 at KICC and was presided over by company Chairman Herve Allibert
Easy registration took a minute. Total have introduced an electronic check-in, shareholders or their proxies show up with a bar code, which is scanned and they as they sign in

Buyout of Chevron assets: in 2007 Chevron decided has divested from petrol stations in west and east Africa and Total is buying their stations in Kenya and Uganda. The chairman clarified that parent Total Group (pronounced Tota hutra -meh) is buying the assets and deal will be finalized in June 2009. Thereafter Total Kenya (78% owned by Total Group) will buy the assets from the Total Group. Total Kenya has obtained regulatory approvals in Kenya, is arranging financing for that deal, and the directors will call for a shareholders meeting in a few months to approve that deal.
In answering another shareholder, Chairman added that Total Group is not divesting from Africa; they know how to do business in Africa, work well here and will continue to invest here

Performance drop in fourth quarter: board member answered shareholder that it was true that Q4 performance was worse. He said it was a s a result of negative stock effect (oil bought at $140+ that was sold at lower prices), and company had to make provision of Kshs 171 million for a supplier (Triton?) who was paid, but failed to deliver products to the company. He added that Q1 of 09 was much improved as the company had received a payment of 150 million in refunds from the Kenya revenue authority (KRA), a feat, which the Chairman added, was very difficult to attain.

Increase in borrowing costs: this had gone up because of the price of fuel was up, while they also had to pay upfront for all taxes

Bio energy: the group does research and investment for that and deploys products such as bio-diesel now sold in Ethiopia

No women directors Chairman said company was aware of this mis-match. They were continuously seeking some women to join the board and also plan to have more women in all management levels of the company

Hot point I – Total’s Q&A format; instead of having shareholders stand and ask questions, Total have (for some years now) had shareholders write their questions down on notes which are then handed to the board table and the company secretary selects a few which to read. The directors were today accused of ignoring some questions, not answering other key questions properly (about the flat share price and lack of bonus shares), while altogether leaving shareholders and some directors in the dark . The Chairman said they would review the practice before next meeting. Another aspect of the meeting (the French Chairman called it a “general assembly” ) that was challenged was the time of the meeting 3 PM

Hot Point II – Goodies:
– Total still doesn’t get it; they always have buffet of meat bitings , today by San Valencia that is messy to serve with shareholders jostling to get some food before it’s finished. They should just serve lunch boxes. 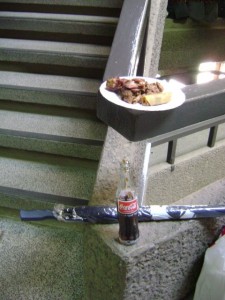 – each shareholder got a tote bag, t-shirt and an umbrella. Some shareholders complained that they had not got their gift items (but somehow other shareholder had 3 or 4 umbrellas) – and the company secretary was asked to record their names and see if the company could have them delivered after the meeting