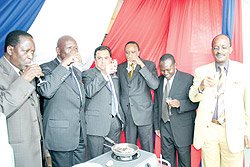 Yesterday I attended a corporate function (center picture) in Karen. I arrived late, and just as the Vice President’s motorcade was leaving. After watching bodyguards jump into moving cars, Raila Odinga pulled Uhuru Kenyatta aside for a brief chat. They talked alone for a few minutes before Uhuru’s Mercedes pulled up and he also left (did not know that the leader of official position uses a GK car). Raila also entered an SUV and drove off, waving to the small crowd through his open window.

Later we walked to the Horseman restaurant for lunch to end the event we were surprised to find that all the politicians had also come for the lunch as well, and were seated at a corner table. As I sat there, I thought about the last time I had been this close to, and can claim to have had a lunch with, Raila.

It was in December 2004, also in Karen, the day Raila’s daughter Rosemary got married in a huge wedding for the ages. It was huge with pomp, bling, money spent well – expensive but tastefully, and was attended by President Kibaki, former President Moi and thousands of others.

That day, I was very surprised to see John Githongo for the first (and only time) time in my life, as he walked in with President Kibaki’s entourage of the day. Reading the Githongo diaries, we know now that it was a momentous day for Githongo as he had just before wedding given the President another explosive briefing on the still underground Anglo Leasing scandal. And just over a month later, he was gone, resigned and in exile from the Kenya government.

And there they were that day celebrating with Raila the man who sways & seduces people, politicians and voters – and who has been a critical ally turned lethal foe for both presidents Moi and Kibaki. Rails was also a man who Kibaki’s people had been uncomfortable with almost to the point of obsession. The Githongo diaries are peppered with utterances where Kiraitu Murungi and other officials told Githongo that Anglo leasing funds were to be used to fight Raila at Bomas, their fears Raila knew all about Anglo Leasing was, that they needed Anglo leasing funds to build up a war chest to strengthen the president and contain Raila.

Fast forward to yesterday, many months late, when I also attended a Kwani poetry slam in the evening. IMHO, the best reading was given by one Muki Garang who gave some nice def poetry performances. He also wore a t-shirt with John Githongo’s portrait.

John Githongo, who is alive, has joined a select list of people immortalized by young revolutionaries – such as Che Guevara, Bob Marley, John Lennon, Malcolm X, Mahatma Gandhi, even 2Pac. Most of them died before their time, often at the hands of others. Yesterday was also the date when another icon, Martin Luther King was assassinated in 1968. He is not a t-shirt icon like the others, but he is recognized in a greater way with monuments, a holiday and is credited with the legacy of spearheading the drive to ending separation in America.

But sometimes when you reach a summit, the only place you can go is down – and the years have not been kind to some people e.g. Michael Jackson, Jesse Jackson and now Whitney Houston – who would all be called icons today if they had left the scene in the late 80’s with their reputations intact. People would be talking about them in legendary status, wearing their t-shirts, and own tons of their memorabilia.

John Githongo deserves more than a t-shirt as a recognition item – which is why he needs to keep evolving and adapting like Raila has done. Maybe Githongo should apply to become the next head of Transparency International in Germany or the USA or come back and be the next head of Kenya Anti-Corruption Commission. He has to keep plugging away, not just commenting.