not what you’re thinking
Last night, I was driving home alone after a stressful workday. It was about 7:15 PM and I was at the traffic light at the end of Koinange (K) Street about to turn onto University Way. Koinange Street is notorious for its red-light nightlife, which normally stars after 9 PM.

I was the second car behind the traffic light and, as usual, I left some space between myself and the two cars ahead. A man (not a parking boy) stepped onto the street and began begging from the drivers of the two cars ahead. In my headlight, he was really rugged and dirty, with one shoe, looked drunk/high, and kept making gestures as though he wanted food in his mouth – but he got nothing from them.

He then walked down the street past me, and then appeared to remember that he had passed a car. He turned and came up to my closed window and repeated his hungry gestures. I ignored him and he stepped back. I tracked his movements in my rearview mirror as he walked round the back of the bar and came round in front of my empty passenger side.

All this happened in a few seconds: He then reached down and tried to pull out my left headlight. I wasn’t aware of what I was doing, but I engaged gears and stepped on the accelerator shoving him away from the car. It didn’t appear to bother him and he walked round the back of my car again. It took a few moments for me to find the reverse gear and eventually I engaged it and moved back by a few feet towards him – and so he walked away and disappeared into the dark alley by Lillian Towers.

I drove into the Vice Preston petrol station where I got out and examined the car for damage, and thankfully there was none. In the past I have seen parking boys on TV, extracting headlights in seconds using screwdrivers or other crude tools – but I think this dude was too stoned and had tried to do the job with his bare hands.

Anyway, this all got me thinking: What if my small bump with the car had not chased him off? Would I have had the courage to run him down? And then what next? Would I have stayed to finish him off/or help him up, or would I have driven 100 meters to Central Police Station, and what would I have reported there? And if a crowd had appeared on the scene, would they have beaten him for being a thief, or stoned me for deliberately running over a hungry, beggar? And if I had seen him carrying my headlight, would I have unwisely got out of the car to get it back from him?

Security industry
The security industry is one area that has experienced tremendous growth over the last few years. Insecurity has gripped the country and especially our leaders. Buildings everywhere are being fenced off and fortified. In front of the Treasury, there is now a 24-hour roadblock /security checkpoint and another one in front of Central Bank. One senior official even (reportedly) has a full-time armed guard in his office, even when he has meetings or visitors.

Ministers and senior government officials are escorted by chase cars full of bodyguards who all speed down the wrong side of roads to bypass (insecure) traffic jams. No one is too un-important to qualify for some extra protection – from MP’s to Narc activists, Kikambala bombing suspects, to department heads and other ‘VIP’s.

It is common to see buses, minivans or some other uninsured GK vehicles early in the morning or evenings dashing across town, full of policemen with their rifles going to relieve other teams that are guarding so-and-so’s houses.

The average Kenyan has deal with a verity of hostile elements, but it appears that these superheroes face a whole other set of super villains and need some extra powers and protections. 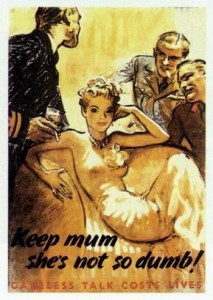 But all the physical security in the world is not enough to protect anyone from their own worst enemy. Loose lips sink ships and just as Kiraitu probably regrets all the talks he held with John Githongo, there is little one can do to secure the words we speak (unless we start acting like the Mafia, and speak in code or assume that all conversations are being recorded)

One night this week at an upscale restaurant, one official was helpless in the hands of a Caucasian lady who, though appearing to be attracted to the man and his every word, pawed and milked him for sensitive information about his powerful government job which he happily provided. Meanwhile he probably had a security team outside waiting to safely escort him home.

Talking Point
Why do most policemen have cell phones (and very good Nokia models) and which they use to report all police matters. Don’t they have walkie-talkies any more, do they trust their radios or are the radio networks unreliable? Who buys airtime for the cops cellphones?

10 thoughts on “K-Street encounter, and other (in) security matters”