Today marks the start of the East African Classic Safari Rally at Mombasa, which will then run through Dar es Salaam, Arusha, Nairobi, the Mara, Eldoret, Nanyuki, Voi and then back to Mombasa for the finish.

It features many pre-Schumacher-era drivers that older Kenyans will remember such as Duncan, Kankkunen, Blomqvist, and Waldegaard who will be driving even older cars such as the Datsun 240Z, Mercedes 450 Ford Escort, Porsche 911 and Lancia Stratos pictured– all from the 70’s era.

Without a genuine international WRC rally, the event is mostly a nostalgic and unique tourist attraction for the country, but still a gruelling event for the drivers who will cover several thousand kilometres over 10 dusty days.

Still, I’d like to see future Classic rallies that involve group B or monster cars of the 80’s such as the Ford RS200, Lancia 037 & Delta S4, Peugeot 205 T16 and Audi Quattro Sport pictured – which unleashed an era of noisy and large rally supercars that had 500+ horsepower, four-wheel-drive, and many other high-tech pieces. 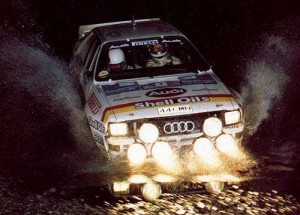 2 thoughts on “Safari rally returns in a way”