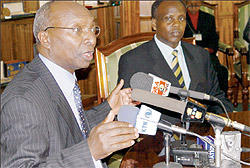 During his first two years at the Central Bank, Dr. Andrew Mullei, was a reclusive Governor who rarely ventured out to banking events – and only if President Kibaki was going to be the chief guest, otherwise he was usualy represented by then-deputy Governor, Edward Sambili, or another CBK official.

Today, Governor Mullei has become a familiar figure in the news, attending numerous bank openings and events, and issuing policy directives from as far away as Naivasha. Factors that may have contributed to this are that he has a new deputy, Jacinta Mwatela, who replaced Dr. Sambili, and he now has to fashion a new communication strategy to deal with CBK image and issues such as the controversy over currency printing, rising interest rates, bank charges and now an unexpected CBK loss.

3 thoughts on “Shy no more”