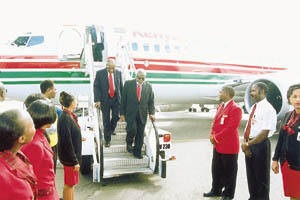 Results are out following the Kenya Airways director elections which were again decided by KLM (120m shares) and the Government in Kenya (106m shares), the major shareholders, who were in harmony in their voting this time. Minor shareholders (i.e. the rest of the top 10 owners) had limited impact on the outcome.

Also, the East African Standard has an intriguing take on the exit of former Chairman, Isaac Omolo Okero.