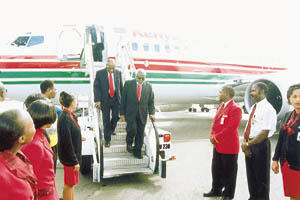 Mr Isaac Omolo Okero will step down as Chairman of the Board of the Kenya Airways Group at the airline’s annual general meeting on August 12 2005.

He has steered the airline which has grown and expanded to unimaginable heights after a few rocky years as it tried to shed its parastatal management and outlook from which it emerged as one of Africa’s leading airlines, winner of multiple awards, and a model for privatization in Kenya.

Of course, the last time he was up for re-election in 2003, he was not the favoured candidate of the new government, who voted for Joe Wanjui. However KLM voted for former Central Bank Governor Micah Cheserem, and also for Okero, who then continued as Chairman. The race is on for his replacement, and we’ll see if it again pits the government against KLM.

1 thought on “Leaving at the Top”