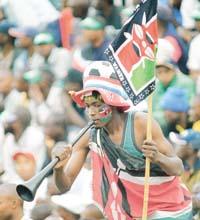 Kenya has been ordered to play a World-Cup qualifier soccer match against Tunisia behind closed doors in September after a fan was killed during crowd trouble at their match against Morocco last month. This will give organizers a chance to reflect on what went wrong in June with tickets (which ran out, and new ones were re-printed and sold even after the stadium was full, uninvited guests both unofficial (the crowd who bum-rushed the stadium, and destroyed one gate as they forced their way in) & official (what was the mayor’s car and about 20 taxis and vehicles doing inside the stadium besides enabling the dignitaries they brought to bypass bothersome ticket and security checks?)among other issues. No fans will be allowed in, but you can be sure that there will a significant number of officials and observers in the stadium to monitor the match.